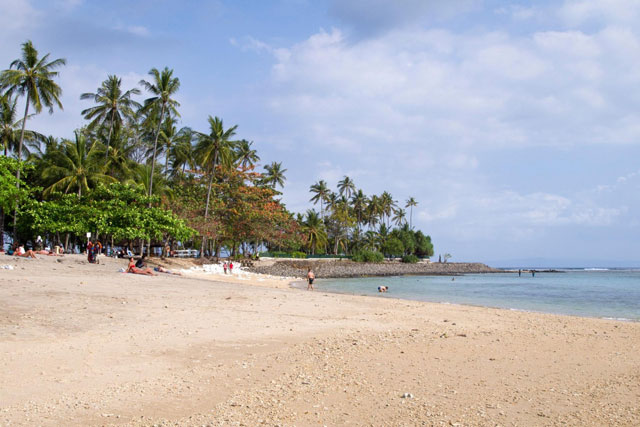 The roads which leaves Ampenan towards the north, passes two small mountains before it reaches a long, bow-shaped beach. On the mornings after moonless nights these hills offer the best view over the sea, which is scattered with small fishing boats with colorful sails, which return to the beach north of Ampenan. When the sunsets the fishermen leave the beach in one long line their lights create a nice play of lights, which can be seen from most hotels on Senggigi beach.

The first of the two small mountains, which are passed from Ampenan, named Batu Layar, contains the dedicated grave of one of the Islamic saints (wali), which spread Islam on Lombok. The local population prays near a shrine close to the road. It's possible to walk from the summit of the second mountain to the Balinese temple along Batu Bolong beach.

The hotel colony grows with the day and slowly crawls towards the north along the coast. The hotels are built along a road, which runs to Pemenang, twenty km north of Batu Bolong. The road passes several hilla, which offer very nice views over the coconut trees along the beach and the sea. The old road to Pemenang is located more inland. It starts in Mataram, passes Rembiga and Gunung Sari villages, which has a busi day market, and then ascends around the village of Sidemen.