Reaching the Caldera of Tambora 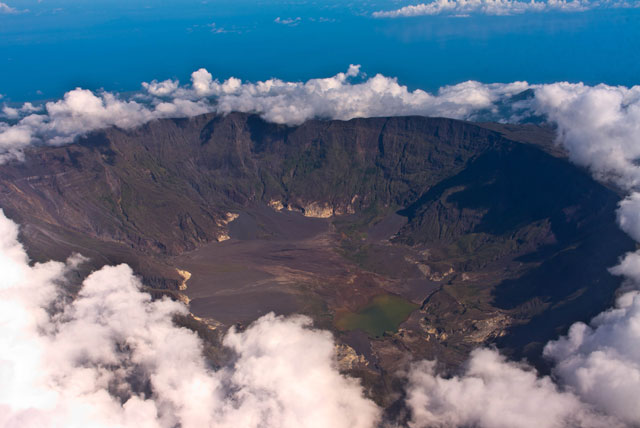 That day we departed from a hamlet located on 600-meter height above the sea level, named Pancasila, Tambora Vilage, Pekat Sub district, Dompu Regency, West Nusa Tenggara. We were aiming to reach the peak of Mount Tambora.

The ojek (motorcycle taxi) took us along the way between settlements and protected forest, on muddy road that was resulted from the pouring rain since the morning. On both sides of the road, coffee plantations were seen as if to assert the fame of Pancasila Village as Tambora coffee producing village. Half an hour later we arrived at the gate where our climbing journey begun.

There was only an arrow-shaped signboard seen, with the word ‘to the peak’ written on it. The signboard was attaced to a large tree. No other signs like door gate or the like. After tidying up our belongings, the four of us -- me, Iqbal Ichsan the photographer, Peqi the guide, and Jackie the porter-- were getting ready for the climb.

The sky was still a little cloudy when we started to climb. The plan was that we climbed to the Post I which is located on the 1,200-meter height above the sea level. The track was a lean slope and there was only one climb. Shady trees fenced the path where we passed on. At some points, the thick leaves dangling out blocking the path. We had to bash the leaves with machete to make way.

After 45-minute walk, we finally arrived at a post about 2x3-meter large with roofing and four large pillars. The hut is a shadow post to reach Post I. From there, we continued our journey. The terrain was uphill climbing and was quite tough. But the beautiful chirps of the birds entertained us with the sound of chickens from a far. All of these sounded like a cool song of nature.

When we arrived at Post I, a wooden lodge similar to the previous one but with more scribbles and looked dirtier. There is a pipe from where water flown out. The water is clear and fresh and drinkable. Unfortunately there were no toilet and washing facilities nearby.

“We will walk around 2.5 hours to Post II,” said Jackie, a porter from Pancasila village.

“The track is quite tough, because there are many trees fall down.”

And the track was indeed tougher. In addition to the uphill, slippery, and muddy path, bushes were blocking our way along with tens of kalanggo trees. Not to mention the leeches that sucked our blood. We had to stop several times to get rid of them.

When we arrived at Post II, the day had darkened and rain started to fall. We decided to stay the night at the post nearby the river.

The birds’ chirping woke us in the morning and we continued our journet to Post II after the breakfast. The challenge were no less fierce in this track. This time we faced poison ivy along the way. It feels like a burn when the ivy touches the skin.

We arrived at Post III 3.5 hours later and met with a hunter who brought two dogs. We set up a tent and leave some of our belongings there because we did not want to bring too heavy load to the top.To reach the top, we had to pass two more posts Post IV and V.

The Tambora peak started to be visible when we arrived at Post V. After a break, we headed to for the peak. Trees along the hill where we passed were withered. It was 10 Celcius degree and the strong wind sometimes blown out our weak body.

After three-hour climb from the Post V, we finally arrived at the peak of Tambora at 17:00 local time. From the 2,851-meter height, the view of the giant caldera was spread in front of our eyes. Giant cliffs are fencing the caldera that stretches around 7 kilometers square. Under the light of the sinking sun, the giant caldera of Tambora looked very grandeur.