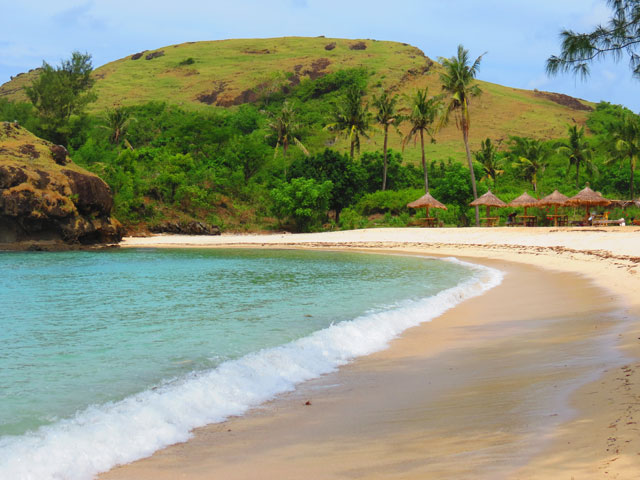 The best-known place on the south coast is Lombok's Kuta Beach (Sometime spelt 'Kute Beach'), a magnificent stretch of white sand and blue sea with rugged hills rising around it, but not much else. Plenty of good waves break on the reefs around here - many supposedly “Secret”. There are lefts and rights in the bay in front of Kuta, and some more on reefs east of Tanjung Aan. Local boatman will take you out for a few thousands rupiah. Go about seven km east of Kuta to fishing in Gerupuk village, where there are several potential breaks on the reefs at the entrance of Gerupuk Bay. Again access is by local fishing boat.

There's more breaks further east and west, from Blongas to Serewi. Also known as Putri Nyale Beach, Kuta on the south coast of central Lombok is one of the most scenic and unspoiled beaches in this part of Indonesia. From Kuta to Tanjung Aan five km away, it is an unbroken stretch of clean white sand on the Indian Ocean. It is safe for bathing and swimming. Further to the west are the surfers and wind surfer's beaches. Each year, on the 19th day of the tenth month of Sasak lunar calendar on February or March when Nyale fish come to the sea's surface, Kuta Beach is the site of great festivities. Fishermen sail out to sea while young men and women gather along the beach to join in the merrymaking, tease each other and perhaps meet to build a more lasting relationship.